Wetherby Senior School is an 11-18 all-boys school, carrying on the traditions established at Wetherby Pre-Preparatory School and Wetherby Preparatory School. Boys enter at Year 7 or Year 9, progressing through to Sixth Form, before they transition to the top universities in the UK and abroad.

Wetherby stands for aspiration, competition and inclusion for all boys, and creates a community of which all staff, parents and children feel a part. With an incredibly skilled, dedicated, personable, creative and communicative teaching staff, Wetherby Senior aims to ensure that boys experience an education that is uniquely ‘Wetherby’. 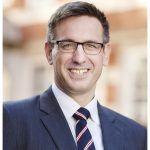 Seth Bolderow joined Wetherby Senior in September 2017 from his previous role as Deputy Head of Harrow International School in Hong Kong, where he had been in post since 2012.

Seth was educated at Norwich School, read Classics as an undergraduate at Exeter University and went on to gain a MS, also in Classics, from St. Anne’s College, Oxford. Since then, he has gained a variety of experience in both boarding and day schools in the UK, holding both academic and pastoral leadership roles. Before moving to Hong Kong, he oversaw the development of the new Sixth Form Centre at the John Lyon School.

The Falcons Preparatory School for Boys

“Alpha Plus is unique among private education groups in that most of the senior management team are educationalists, including me.”