St. Anthony’s is an academic IAPS preparatory school for boys between the ages of 4 and 13 years. It is Roman Catholic and welcomes boys of all faiths. The school was founded by Richard Patton during the Victorian period and became part of the Alpha Plus Group in 2009.

The school has a family atmosphere, relaxed and fairly informal, with a rigorous approach to learning. Great care is taken to ensure that pupils feel happy and at ease in the school environment. 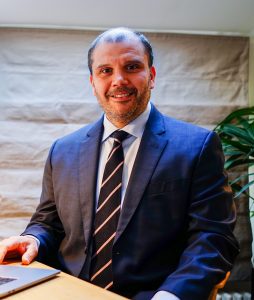 Richard Berlie was educated at the Salesian College in Battersea before going up to Magdalene College Cambridge to read History; he remained in Cambridge following graduation to take a PGCE and qualify as a teacher. Richard taught History at Wymondham College and Ampleforth College where he was also Assistant Housemaster and Scholars’ Tutor. He returned to Emanuel School in London as Head of History and Politics, and subsequently Head of Humanities. Senior leadership positions followed at Dulwich College as Head of the Upper School, and most recently Vice Principal at Mander Portman Woodward in South Kensington. Richard’s links with senior boarding and day schools is extensive.

Richard writes: “The distinctive ethos of St Anthony’s School promotes the individual talents of each boy with the aim of giving them the best start in life. This is pursued through a rigorous and interesting academic programme that provides stretch and support in equal measure. The Catholic nature of the community celebrates each pupil for who they are rather than what they do. An environment more akin to a greenhouse rather than a hothouse, St Anthony’s boys turn out kind, courteous and thoughtful. The school’s approach to 11+ and 13+ applications is to work with boys and parents to secure a senior school where each boy will fulfil (and exceed) his potential. Our record in doing so is second to none”.

“It is great to be able to share best practice with other high quality schools and professionals in the Alpha Plus Group.”

Mark Snell, Headmaster of Wetherby Pre-Preparatory School
We use cookies on our website to give you the most relevant experience by remembering your preferences and repeat visits. By clicking “ACCEPT ALL”, you consent to the use of ALL the cookies. However, you may visit "Cookie Settings" to provide a controlled consent.
Cookie SettingsReject AllAccept All
Manage consent

This website uses cookies to improve your experience while you navigate through the website. Out of these, the cookies that are categorized as necessary are stored on your browser as they are essential for the working of basic functionalities of the website. We also use third-party cookies that help us analyze and understand how you use this website. These cookies will be stored in your browser only with your consent. You also have the option to opt-out of these cookies. But opting out of some of these cookies may affect your browsing experience.
Necessary Always Enabled

Performance cookies are used to understand and analyze the key performance indexes of the website which helps in delivering a better user experience for the visitors.

Analytical cookies are used to understand how visitors interact with the website. These cookies help provide information on metrics the number of visitors, bounce rate, traffic source, etc.

Advertisement cookies are used to provide visitors with relevant ads and marketing campaigns. These cookies track visitors across websites and collect information to provide customized ads.

Other uncategorized cookies are those that are being analyzed and have not been classified into a category as yet.