Davies, Laing and Dick College (DLD), founded in 1931, specialises in preparing students for A-levels, BTECs and GCSEs. Its reputation is built on success in public examinations and the quality of its small group teaching. DLD College operates from purpose-built premises in the heart of London, directly opposite Westminster and Big Ben. The campus is a few minutes’ walk from Westminster Underground or Waterloo Station. 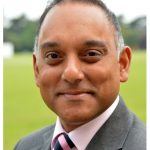 Irfan joined the College on 1st January 2018 from his previous role as Headmaster of Sexey’s School in Somerset. During his career Irfan has held a number of leadership roles in the independent sector, including Deputy Head (Academic) at Bedford School, Head of Science and Chemistry at St Benedict’s School, Senior Housemaster at Whitgift School, as well as being an Assistant Housemaster and Teacher of Chemistry at Haberdashers’ Aske’s Boys’ School.

He graduated from King’s College, University of London with a BSc Hons in Chemistry and he holds a PGCE in Secondary Education, also from King’s. He is currently Vice Chairman of the Boarding Schools’ Association and Chair of the State Boarding Forum and is also on the Board of Education at the Diocese of Bath & Wells.