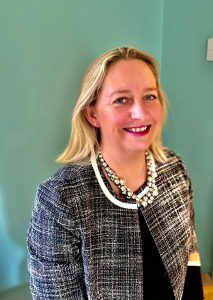 Alpha Plus is delighted to announce that Sophie Banks will be the next Head of Pembridge Hall. Sophie will be taking up this appointment from September 2022.

Mrs Banks was educated at an all-girls school, St Michael’s Burton Park, Petworth, and then at
the University of Warwick where she received a BA, with Qualified Teacher Status, with a
specialism in Music and Drama. More recently Sophie obtained a Masters degree in
Educational Leadership at the University of Buckingham.

Mrs Banks is currently the Head of Eton End School in Datchet, near Windsor. Eton End is a school
of around 245 pupils, girls and boys, which sends children to schools such as Eton College,
Wycombe Abbey, Lady Eleanor Holles, St Mary’s, Ascot, St George’s Weybridge and The
Abbey, Reading when they leave school at 11+. The school has high academic standards, as
evidenced by the fact that the pupils have won scholarships to schools such as The Abbey,
Reading, Sir William Perkins, Heathfield, The Marist and St George’s Ascot over recent years.

Prior to taking up the Headship of Eton End in 2018, Sophie was the Head of the Junior School
at Beachborough School. Beachborough is a coed prep school in Northamptonshire and has
around 390 pupils aged 3 – 13. Before Beachborough, Sophie taught at Dulwich Prep in South East London and she started her teaching career at the City of London Freemans School in Surrey.

We look forward to welcoming Mrs Banks to the Alpha Plus group family.

“Being an APG Head is very empowering. The Governors find the balance between keeping you accountable, quite rightly, and allowing you the freedom to run the school as you see fit.”

Henry Keighley-Elstub, Headmaster of Pembridge Hall
We use cookies on our website to give you the most relevant experience by remembering your preferences and repeat visits. By clicking “ACCEPT ALL”, you consent to the use of ALL the cookies. However, you may visit "Cookie Settings" to provide a controlled consent.
Cookie SettingsReject AllAccept All
Manage consent